As nice is it is to be back home, it was very hard to leave paradise. I will have a lot more to say about that. I need some time to come up with better words than “beautiful”, “exotic” and “delicious”.

Here are a couple of teasers: 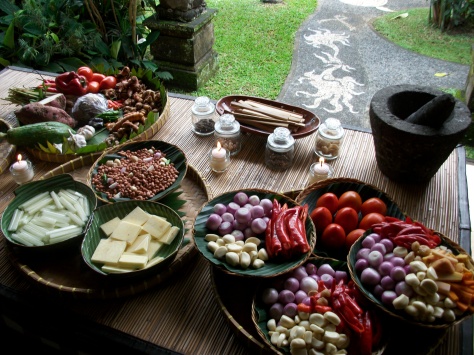 For now, I’ll start with the journey home, which began with a night flight from Denpasar to Seoul.

Three cheers for Korean Airlines. The nice check-in man at Denpasar airport put a special red SHORT CONNECTION label on my suitcase because I only had 45 minutes between flights at Seoul. I wasn’t particularly worried about it but I was seated at the very back of the peanut gallery and one of the lovely cabin attendants was worried. Twenty minutes before we landed, she moved me to first class, my very first time to sit there. I didn’t get any special service, but I did get to play with the buttons on the seat AND use the exit for fancy folks.

The cabin attendant was also worried about my suitcase and told me to enquire at the boarding gate, which I did, but the guy rather facetiously said I’d have to enquire at Narita, which in the end proved unnecessary. My Residence Card and I sailed past the hundreds of Korean tourists waiting in the FOREIGN PASSPORTS line and my red-tagged suitcase was already dancing around the carousel when I got to baggage claim. I zipped through customs where the staff are always delighted with foreigners who can speak Japanese, and hopped on the Narita Express which whisked me homeward, past the familiar rice paddies and tiled roofs and winding narrow roads, so much like Indonesia and yet so very different.

Much as I love to travel and see new places and try new things, it’s a pleasure to be back where I know how things work. I know where and how to buy a sandwich and a train ticket and can do those things without drama or fanfare. I always forget, when I haven’t traveled for a while, just how difficult such things can be*, and while it is a pleasure to cope with them to whatever degree of success, it is also a pleasure when they are easy.

*Most of our meals were group affairs, but one evening we were on our own and eight of us ventured out to find a restaurant. People were tired and kvetchy and couldn’t agree on where to go. I don’t have much patience with that sort of thing so went to the supermarket, where I wandered around for half an hour and ended up with a bag of potato chips and a bottle of Bintang beer. I recommend the latter; the former are better avoided. We live and learn.

Today was a day for GETTING THINGS DONE.

I hadn’t had a check-up in nearly two decades, and since I became officially aged, the ward office sent me a stack of tickets for nearly-free medical checks. Rochi has to go with me on these escapades—I still can’t fill out the forms and unless it concerns knee ligament reconstruction, my medical vocab is still woefully lacking.

So we went to an internist, I was duly poked and prodded by a nurse, and then we met with the sweetest doctor ever, who asked why I had finally decided to do it. I said, “Well, my age…” And she didn’t believe me. She asked what was really wrong and I told her, “Nothing. Honestly. He was concerned about me.” (Cue the tiny violins–that may be the best valentine ever.)

Turns out everything is hunky-dory. My heart is strong, lungs are clear, blood pressure normal, nothing in my blood or pee that shouldn’t be there, and I’m nearly four centimeters taller than I thought I was, although I didn’t feel the measuring thingy touch my head, so maybe the nurse was being generous.

And off to immigration to deal with the new passport. That place is still the same appalling zoo it was last time I went there, crowds of worried faces milling around trying to figure out which bit of red tape to gnaw on.

Finally finding the right line to wait in, my turn came and the nice immigration man explained the new rules. I can keep my current Certificate of Alien Registration and get a multiple re-entry permit, which is now good for five years instead of three and costs $60, or I can ditch that card and instead get a Residence Card, whereby re-entry permits will no longer be required and it’s free. You do the math. Besides, who wants to be an alien if they don’t have to?

I am now armed with a shiny new passport and Residence Card as well as a clean bill of health. And I am again free to travel.

The invitations will start rolling in, right?

I take back all the mean things I thought, said and wrote about embassy people.

I am now at liberty to leave the country, just as soon as someone invites me somewhere and sends me a plane ticket to get there.

Never mind the invitations. This is going to take a while.

During this past WWW (Work Widow Weekend) I finally dove into the boxes of old letters. Well, one of them anyway, and then one thing led to another and I got rid of a bunch of old junk I’d been keeping simply because I’m a pack rat.

Old bank books, expired frequent flyer cards, traveler’s check covers (seriously?) all in the bin. And then much to my dismay, I discovered that my passport had expired six months ago.

It used to be that you could just go to the Embassy and apply for a new one. But noooooooo. Now you have to make an appointment, and according to their online calendar, no appointments are available until the end of February.

I understand. It’s tough for embassy personnel. Between taking all Japanese AND American national holidays off, they also have to make time for long lunches, not answering the phone, and the occasional mani/pedi.

OK, plan B. You can apply by mail. All you need to do is download the application, provide a photo in a size that doesn’t exist here, and get a prepaid return envelope and money order in dollars from the post office. (Catch 22: The embassy will take cash, but won’t give you an appointment to fork it over.) The new passport costs $110 and when the photo, envelope and postage are thrown in, this adventure cost nearly $150. Doesn’t it seem like a new passport should be a right rather than a privilege?

It took an hour and a half to get the money order, with two post office ladies helping me get the paperwork right, but while I was waiting, one of them gave me some lemon drops. That kind of took the edge off.

So now I will entrust my expired passport to the Japanese postal system, the American embassy, the US passport office in Philadelphia, and possibly the Postal Fairy (see May 24 last year).

In the meantime, I can’t leave the country. And when all of that is done, if it ever is, I get to go to immigration, which is conveniently located three trains and a bus ride from here, to have my visa transferred.

I knew I was having too much fun lately.