This morning marked my 104th meditation session, 1920 minutes of being mindful.

I’m doing an online guided meditation course. It keeps track of these things. I took great pride in watching the numbers rise on my quit smoking meter, but there’s something oddly unsettling about Big Brother knowing how much time I’ve spent looking inside me. At least he doesn’t know what I’ve seen there. Probably.

Yesterday, The Voice told me to visualize a point of light in the middle of my chest and allow it to grow and grow until it reached the edges of the universe.

Today, the light turned into an effervescence that bubbled up and out of me like champagne from a shaken bottle. I can’t find the words to describe how good it felt.

The Voice also told me to take time to revisit that state of mind several times during my day, so I did. As I was standing on a platform waiting for a train, I closed my eyes and the bubbles started pouring out of me. The train had to drive through a great cloud of them as it pulled into the station. It reminded me of the light parade at Disneyland and I couldn’t help smiling.

There are few things as mind numbing as standing on a platform waiting for a train. Anything that can turn that experience into champagne and Disneyland is worth pursuing.

…there have been a few rumors about the sudden and unexplained absence of the Mouse.

One has the Mouse with her tail stuck in a revolving door at the Mitsukoshi department store in Ginza where she has been going round and round for several weeks.

Nor is it true that the Mouse has taken up residence in Cinderella’s Castle at Disneyland. She would never take a chance on being spotted with the Other Mouse, who is a rather silly fellow and something of a merchandising slut. Plus that voice? It works for Frankie Valli; inappropriate for a self-respecting mouse.

The Mouse will admit, however, that a visit to Disneyland on a rainy Thursday afternoon in February, although damp and chilly, is a wonderful experience. It really is a magical kingdom when there’s nobody there and she does have a weakness for It’s A Small World.

Yet another patently untrue rumor is that she has found a secret entrance to the Tokyu Food Show and sneaks in at night to nibble on the imported French cheeses, leaving behind toothmarks and toe prints.

We officially disavow any knowledge of those responsible for such uncouth behavior. The Mouse uses a china plate and a silver knife. Her cheese is accompanied by crisp baguette, although depending on the exchange rate, those elegant trappings are often replaced with Velveeta and saltines.

The truth is that the Mouse found herself a little overwhelmed. The sights, sounds and smells of Bali were everything that she had hoped for, but she was unprepared for how those experiences would change her perspective on life in Tokyo, and still hasn’t figured how or how much any of that matters. 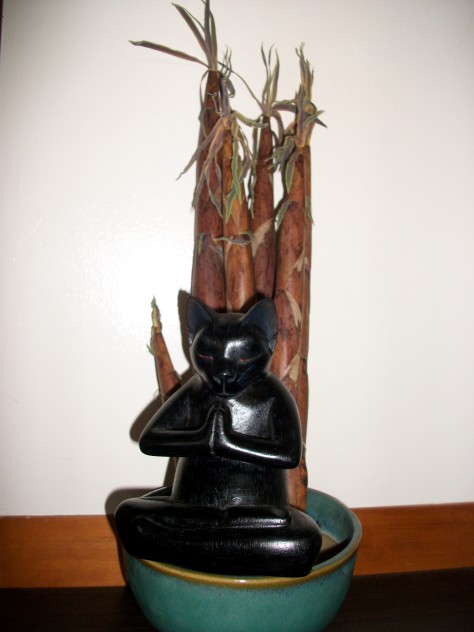 So please allow me to introduce myself. I am Meditation Cat. I am a conduit between the missing Mouse and anyone who is seeking her. I am wise. I am handsome. I am available for consultation on matters grave or trivial but reserve the right to give cryptic advice or none at all. All compliments will be gracefully accepted; all criticism will be wholly ignored.