I had to go to a meeting at the Shinjuku Mitsui building yesterday. It’s got a large lobby and an outdoor terrace, both of which are occasionally stages for mini concerts. This time there was a grand piano, a man in a tux and a woman in an evening gown. When I came in, she was singing Somewhere Over the Rainbow, in English, and quite well, I might add but I can’t imagine why she chose that particular song. Then she sang a special Christmas medley including Joy to the World, Silent Night and Rudolph, all in Japanese.

I once saw a US military band performing there. No explanation, but I suppose it’s got something to do with neighborhood relations, except that the “neighborhood” is a bunch of other tall office buildings and a couple of ritzy hotels, including the Keio Plaza, where they filmed Lost in Translation, one of the worst movies I’ve ever seen.

I tried to enjoy the concert, but it’s disconcerting (nyar, nyar, nyar) when Rudolph has an akai hana instead of a red nose. The whole experience gave me a brief reality jolt. I guess some things just get lost in translation.

We’re in the process of filming a couple of very basic English education videos for 3-4 year old kids. “Tedious” is a monstrous under-description of what that entails, and I have to be there  and conscious for every pains-taking, aching, dragging, agonizing minute. In the early days, I often went nuclear: “For Pete’s sake, it was fine the first 47 times! Why do we have to do it again?” But I’ve learned a lot over the years. There are still so many technical things that I don’t understand. There is almost always a reason why thirty or so people are standing around waiting with our thumbs up our noses. At this point, I could walk Job through Patience 101; one would not survive this kind of work otherwise.

It helps that the work is sometimes rather surreal. After all, what video would be complete without a potato salad Christmas tree? 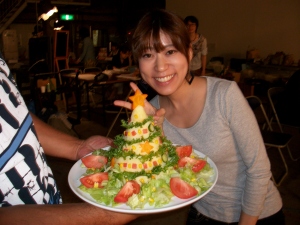 And Kiko’s Dorothy Gale Meets Barbie the Hooker costume was hard to ignore. I may have nightmares about it. I know she does.

On the second day, I was sitting with Randy and Melinda. Randy is the funnyman in this series of videos, a down home Southern gentleman from Alabama and qualified circus clown. He wasn’t all that tired.

I had sat through fifteen hours of filming the day before and we were coming up on the eighth hour of the second day with no end in sight, knowing we had two more interminable days ahead of us. I was tired, too.

And that’s when the sillies kicked in. I discovered a collection of truly inappropriate children’s literature…

…that had sent the three of us into paroxysms of giggles.  Most of the crew smiled indulgently at our antics.

Eventually, near silence once again descended. Melinda was shopping online. I was doing an online jigsaw puzzle. Randy was playing a game. It was pretty quiet. 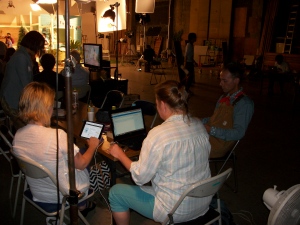 Without warning, Randy (remember he has an Alabama accent) looked up and demanded to know:

Who you callin’ paranoid?

Fifteen minutes later, as we clutched our aching sides and wiped the tears from our faces, we finally pulled ourselves together. This time, most everyone ignored us.

After all, everyone knows all foreigners are nuts.