As part of the quit smoking odyssey, I joined an online support forum. It offers tons of information, but most importantly, you can join a group of others who quit around the same time as you. Through it, I have “met” some wonderful people who I believe will remain my friends for years to come.

One of the features of the site is a quit meter. You input your quit date down to the hour, the number of cigs you used to smoke every day and the cost of those cigs. When I checked my quit meter this morning, it said 6 months, 5 hours and 14 minutes, which means I have reached the Halfway House. At one year, we enter the Clubhouse.

I will not reveal the humiliating number of cigs I have not smoked, nor the exorbitant amount of money I’ve saved. Let’s just say that between the two of us, two months’ rent have not gone up in smoke. Literally.

I should be turning handsprings and chanting ditties about rainbow-colored lollipops. They say, “You did it! You quit smoking! Now you feel so much better and have so much more energy!”

Unfortunately, it turns out that is poppycock. It’s absolute, utter nonsense. It belongs with Santa Claus and the Easter Bunny. It’s the kind of stories people tell small children to make them behave. I feel horrible most of the time. I am moody and cannot trust my emotions. The problem is that only now, finally, my brain is getting adjusted to normal dopamine levels. It will be another six months before my metabolism returns to normal.

The glimmer of hope is talking to people who have been quit longer than me who assure me it will get better. At this point, I honestly only rarely want to smoke. My triggers seem to be limited to anger and frustration and if I can take a moment to close my eyes and breathe deeply, the urge passes. The thing is, once an addict, always an addict. I will have to remain vigilant for the rest of my life. But from the top of my head to the soles of my feet and deep inside my heart and soul, I know it is worth the battle.

I read a wonderful quote on the quit smoking site:

*Twitchy sat on my lap for a few minutes this morning, another first. I think it was her halfway gift to me.

The latest development in Twitchville:

She dances figure eights around my ankles shouting, “Twitchy up! Twitchy up!” So I pick her up. She presses her warm, soft body against my chest, sometimes rubs the back of her head on my neck or turns to look at me and we touch noses. All the while she purrs.

Then instinct kicks in and she starts to squirm. “Twitchy down! Twitchy down!” she shouts. So I put her down.

I had some time to kill the other day. The weather was pleasant, cool enough in the shade, and there was a nice breeze, so I sat on a bench in a park. There were lots of trees and a large fake waterfall that provided background music. It was hard to believe that I was just down the street from the skyscraper district in Shinjuku.

The district includes the Tokyo Metropolitan Government building, which looks like a giant transformer robot stuck head first into the ground. There are other tall office buildings, including the 55 story Mitsui building where I work, and the Hilton and Keio Plaza Hotels.

Not far from where I was sitting, there was a homeless person’s abode.

It appeared to be a wooden or metal frame lifted up off the ground and covered with blue plastic tarps. Next to it was a wheeled cart with a large wooden box on it, also covered with plastic tarps secured with bungees. On top of the box was an open umbrella propped in place with a stone, and under the umbrella was a sleeping cat.

Plato and Dana were about ten days old when they came into our lives.

We had always wanted a cat, but our previous landlord lived in our building and hated all living creatures. She said I could get a fish, but the thought of curling up at night with a guppy was unappealing.

Scroll forward a few years. I was pedaling home from work one evening and saw a sign in a pet shop window:

We had recently moved and our new landlord lived in Saitama, safely far enough away that he would never be the wiser.

Someone had abandoned a litter of five tiny kittens in a cardboard box at the shrine down the street. I took that as a good sign, not the abandonment—that was flat out evil—but I thought the kittens might be blessed in some way. One of the neighborhood ladies had taken them home, but she already had three kids, two dogs, a cat, a goldfish and a turtle, and was pretty desperate to find homes for the kittens.

Dana was the liveliest, and prettiest, of the bunch. It was love at first sight for Rochi, not so much for Dana; her eyes weren’t open yet. The three kids gave their mom a beseeching look; Dana was obviously the one they wanted to keep, but mom shot them a warning glance that said, “We talked about this. Let them take whichever they’re willing to take.”

I pointed at Plato, who was curled up in a ball, fast asleep and partly buried under other warm, furry bodies.

“Because he’s fat. He’s got a better chance of surviving.” I am inanely practical at times.

We took them home, made them a nest of fake fur and started feeding them kitten formula from tiny baby bottles. We’re the only parents they ever knew. Proof of this is that neither ever did the kneading thing, which is a memory of nursing. All they remember is mom had rubber nipples. 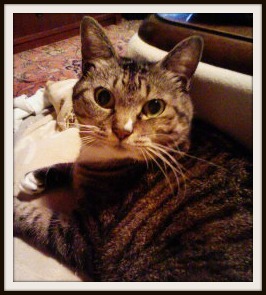 Scroll forward again, fifteen years this time. Plato got sick. I did my best to keep him alive but eventually he died. I posted about that at the time and won’t go into it now. 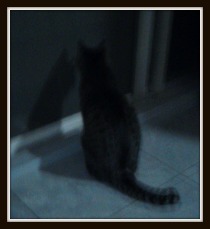 One final scroll forward, this time a year and a half. Last week, Dana got sick. Really sick. So sick that we accepted it was over and would have to make our peace with that. Then Monday morning, I got up early. She followed me into the kitchen, looking hungry, and ate a bit of canned tuna. I did a little jig, then went back to bed to wait for Rochi to wake up. When he did, I touched his shoulder and said two words. “She ate.” He nearly jumped out of his skin (I  NEVER speak first thing in the morning) but quickly recovered himself and did a little dance on the way downstairs.

She’s still weak and won’t eat much, but she is eating. We have no idea how much time we’ve got left with her, but it looks like it may be a while.

I guess the point of all this is that I have no religion and don’t believe in God, but I do believe in hope. Without hope, there’s nothing, and for the time being at least, I’ve still got that.