I arrived at Denpasar just after midnight, tired but relaxed, knowing that someone would be there to pick me up. I went through the magic doors and there was a long line of little brown men holding pieces of paper with people’s names on them. Mine was not among them. I checked up and down the line a couple of times to make sure. The only contact information I had was the phone number of the hotel but I had no phone and no local currency. So I stopped walking and thought, “Well, this is a pickle.” But then friendly taxi man came over and asked where I was going. “Sideman, and someone is going to pick me up.” He said, “No, no. It’s much too late. They’re not coming.” I insisted that they would and got out my itinerary. Nice man that he was, he called the hotel, who said the driver would be right there. Turns out he had been driving all day and had fallen asleep in the van. No harm done, and I’m glad to know that I don’t panic easily.

After all of that, we rolled into the hotel around 3:00am and I was fairly bleary by then, but was greeted by a woman named Ayu who took my hand in both of hers and a wave of warmth and sincerity shot up my arm and directly into my heart. “Follow me,” she said. “I’ll show you to your room.” And this is where we went.

Ayu slipped off her sandals and padded across the terrace.
She pushed open a pair of ornately carved wooden doors and I saw this. 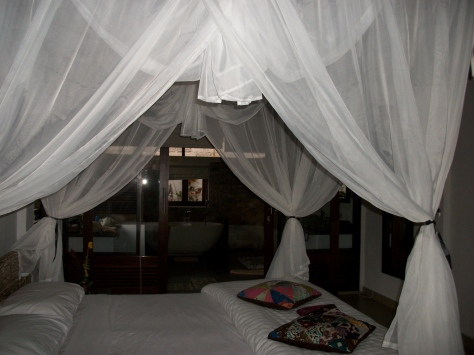 The tiles were cool on my tired feet and there were flowers everywhere. I couldn’t find my towel for the longest time because it was disguised as a snail. 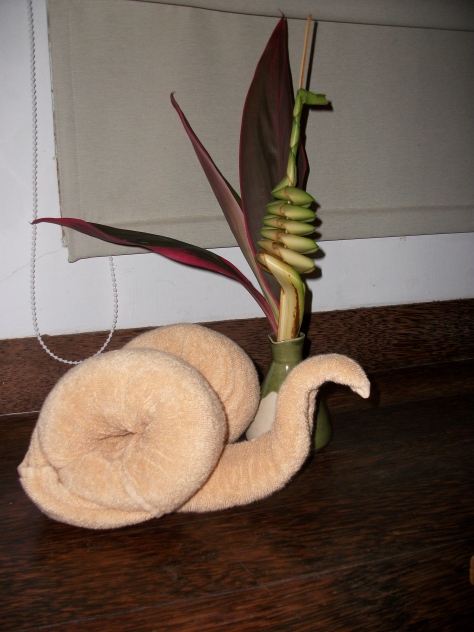 The understated beauty, the simple elegance, the sense of fun all reached out to me. It’s hard to describe the way Bali fills up your senses. It’s not just the scents of lotus and jasmine flowers but also the constant burning of incense with an undertone of steamed rice. I see ranges of greens rising above the rice paddies, highlighted with bright flowers in tropical hues, and all the while there is the sound of running water.

In the morning, I sit on the terrace and soak up the atmosphere. The moss on the gently swaying trunks of coconut palms and papaya trees winks in the early morning sunshine under a clear blue sky adorned with the faintest brush strokes of wispy clouds. All around is an orchestra of crickets, birdsong, rooster crows, gekko chirps and flowing water, always the sound of flowing water. Just outside my room, a staircase of terraced rice paddies brimming with water and life makes its way down the slope. It begins to rain, the drops adding syncopation to the orchestra of sound, the concentric rings they make forming popcorn patterns on the surface of the water, always changing, each unique.

Despite the drought on other parts of the island, at that altitude the ever flowing water seeks lower climes, meandering from the heights through rice paddies, the myriad swimming pools and carved stone fountains, always flowing, always seeking, somehow seeming to know its destination.

The earth is sodden, so the many buildings that make up the hotel complex are connected by rutted stone and concrete walkways. One quickly learns to carry a flashlight and walk gingerly, especially in the dark. On the first night, I stumble on the way to dinner, scrape my elbow and bash my knee. The knee is all right, jut bruised, but for the rest of the trip I can’t put my weight on it. One of the women in my group notices me icing it down and asks what happened.

“I fell, that first night,” I said. “Didn’t you notice me doing very strange yoga?”

“Yes, I noticed,” she said. “I just thought you were doing really advanced poses.”

There is something almost mystical about doing yoga in those surroundings. I work my way into a pose then look up. The inrush of sights, sounds and scents fills me with both joy and a profound longing, as if I could somehow know everything that can be known, see the ageless connections among all living things and find peace, a peace that reaches from the bottoms of my feet through the top of my head and out into the infinite universe. 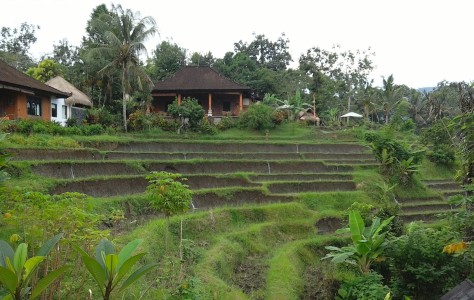