The journey from home to the studio is just over 16km, which doesn’t sound like much, but if you think about the number of streets and buildings and vehicles and bikes and dogs and feet the trains pass under in that distance, the numbers get overwhelming pretty quickly. Add to that the trains were running late so the platform was human gridlock. She  had to wait for two trains to pass before she could even descend the staircase.

Space is plentiful in a sardine can compared to the crush of humanity inside the cars. The man crammed against her chest has beads of sweat on his upper lip. Someone smelled of mothballs, another of garlic, but worst of all is the tobacco stench, which curls its hateful fingers into her nostrils no matter which direction she turns her head.

The train lurches and rattles. The bodies getting on and getting off press against each other, each determined to reach its destination, oblivious to the others. The pain begins in her feet and slowly travels to her knees, intensifying as the journey lengthens. Tears threaten.

And then, at long last, train arrives at the station and she makes her way to the street. She passes through an elegant bamboo gate…

…into a wonderland where she is greeted by sophisticated penguins…

…and prairie dogs rise out of the pavement to greet the warmth of the sun. 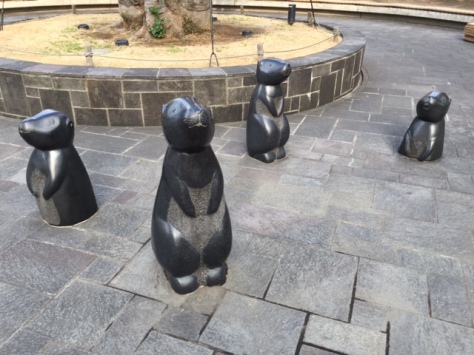 She indulges herself in a celebration of this magical world, then takes a deep breath and turns her footsteps toward the studio, the work, the people, drawing strength from the electric fibers in the threads that bind the universe.

Sometimes a moment of recharge is all it takes.