Most of what you’ve heard about Japanese manners is true. There are prescribed behaviors for nearly every situation. This makes social interaction glitchless since everyone usually knows exactly what is expected of them.

There are exceptions to accepted behavior, of course, although most rules follow the concepts of honne/inside and tatemae/outside. In a nutshell, it’s OK to fart in public but you wouldn’t do that at the dinner table. One of the most extreme examples I ever saw was a Japanese man standing under a “No Smoking” sign at an airport. He was smoking, and when he was done, he dropped the butt on the carpet and ground it out with his shoe. He probably doesn’t do that at home. 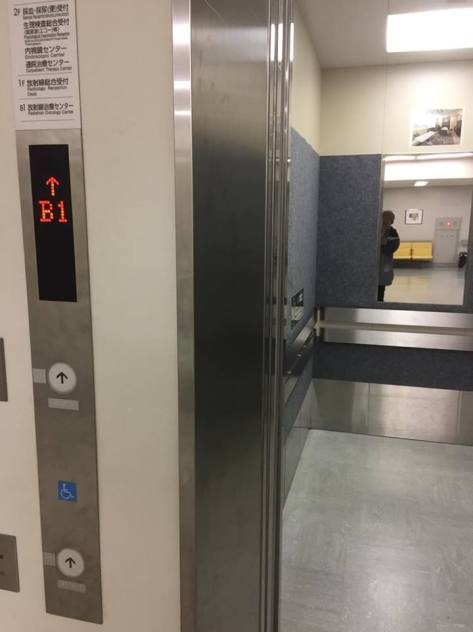 Elevator etiquette is simple and clear. Whoever gets in first holds the “Door Open” button until everyone else gets in. When we arrive, that same person holds the button again until everyone gets off. I’m very careful about this, especially at the hospital, not just because it is expected, but also because many of the others in the elevator are worse off than me, with canes, walkers or wheelchairs. No one should be penalized for being broken or sick, and the good little girl inside me feels good about being good. Plus, nobody can have too many brownie points.

The other day, however, a woman held the “Door Open” button while I got on, but when we got to the dungeon, she dashed off first, leaving me to fend for myself. I just shrugged, figuring she was a) in a hurry, b) oblivious, c) hates foreigners or d) a bitch.

I followed her to the computer where we scan our bar codes and of course her name went up above mine on the monitor. Two minutes later, the tech called me.

I don’t know why that happened.  I’m quite sure it isn’t because I am a Badass Unicorn Juju-powered Hottie, although that certainly doesn’t hurt. Most likely, the machine was already set up for zapping torsos and she was there for some other body part. Whatever the reason, I thanked the Goddess and was careful not to look at her as I was leaving, although the bad little girl inside me was throwing mud pies and sticking out her tongue. 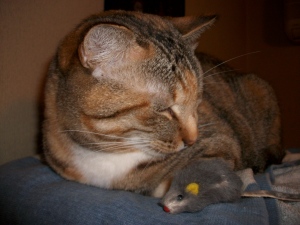 I hate sales calls. Really. I truly despise them. The whole concept of inviting yourself into someone else’s private residence, and insisting that they buy stuff they didn’t ask for is so invasive that I am truly offended.

On the other hand, one of the few advantages to being a befuddled foreigner is that I can pretend I don’t understand when I don’t want to. But I at least try to be civil. After all, these people are just doing their jobs. I doubt many little boys and girls look up into the night sky and dream of becoming telemarketers. There must be some reason why they ended up there. Perhaps they were politicians in a previous life.

But there are limits. The one who just called blathered away at me about high speed internet service then asked me if I was the “internet user” in the house. I told her politely that I had no idea what she was talking about. That’s what I said, too. “I’m sorry. I don’t understand what you’re talking about.” Her response was, “When will there be someone there who does understand Japanese?”

I don’t know about current telephone etiquette in other countries, but as far as I know, that took rudeness to an echelon so highly elevated that I’d be surprised if an atom of oxygen has gotten to the silly woman’s brain in the past several decades.The Japanese that I spoke was perfectly fluent. Maybe it’s high speed internet that I don’t understand. Or optical fibers. Or any of the other words I pretended not to understand.

So I told her there wouldn’t be anyone like that here until at least next week. She said she’d call back but I doubt she will. After I hung up, it occurred to me that maybe she did know I was lying and was playing a cat and mouse game of who can out-rude who. I hope I won.