Ever since I embarked on the cancer odyssey nearly a year ago, I’ve tried to compartmentalize things into manageable chunks. Have the biopsy, wait for the results. Have the surgery, survive hospital life, go home. Start chemo, get through the first cycle, then get through the second. Stay strong but know when it’s time to hide in the blanket fort. Find a way to walk the fine line between acceptance and acquiescence.

Last week, I went to the doctor’s office for chemo number two in the second cycle of four, number 14 of an overall 16. The goalposts were starting to shimmer on the horizon and I was feeling pretty good. But as is often the case, the port they’d implanted in my chest was not working. The doctor came in to fix it…or so I thought.

“It’s metastasized,” he said.
“What?”
“That means the cancer has spread.”
“I know what metastasized means. How do you know?”
“Your blood tumor markers have shot up.”
“My who have what?” I’d never heard of blood tumor markers.
“See these numbers on this lab report? They mean there are more tumor cells in your blood and that means you have more tumors, we just don’t know where or how many.”
“But….” They had never shown me my lab reports and I hadn’t thought to ask.
“I’ve scheduled you for a full body bone scan and a torso CT to see if the tumors are in your lungs or liver. You don’t have to do chemo today if you want to wait for the test results, but I recommend you keep going with the treatment.”
“But…but…. So twelve weeks of toxic waste did nothing?”
“Looks that way. There won’t be any more surgery. You have two more chemo sessions scheduled after this one, and then we can extend it to a total of ten. Your body can’t take any more than that, so if it doesn’t work, we’ll have to try something else.”
“But…does this mean…. Am I dying?”
He looked straight into my eyes and said, “Yes.”
Then he patted my knee and left.
Tears fell, but I wasn’t crying. I was overwhelmed with helpless rage.

We had to wait five days until the tests and then another two for the results. The time passed in a fog of disbelief and denial and deep meditation. I also donned my best Nancy Drew frock and started chasing down clues. From what I learned, tumor markers don’t mean anything during chemo, which can make the numbers go haywire. Beyond fatigue and labored breathing, which are normal during chemo, I had no symptoms of metastasis. But that’s another of the insidious traits of cancer; everyone is different, every cancer is different, every reaction is different, which means doctors don’t really know anything and are flailing around in the dark, leaving cancer patients stranded on deserted islands of confusion and soul-wrenching terror. I was walking on eggshells on a tightrope suspended over quicksand while trying to balance a wriggling gummy worm on my nose.

When we finally got the results, the doctor smiled and said, “I’m so sorry. I was wrong. There is no evidence of further tumors, no metastasis.” My gut desire was to rip off his smiling face and savor watching his blood drip onto his pristine lab coat. Instead, I dropped my bag on the floor and grabbed on to the wall because I was suddenly trembling violently, barely able to breathe, adrenaline shooting out of every orifice like fireworks.

“This doesn’t mean you’re cancer-free, it just means you don’t have any new tumors. And it doesn’t mean you won’t get new tumors in the future.” Yes, I understand all that. But it also means I can go back to my goal of finishing chemo, hoping my hair will grow back and trying to find some semblance of normal life, rather than counting off the days until my untimely death and getting gradually sicker every one of them.

Ah, but we weren’t done. It was time to drop the other boot. “You do have interstitial pneumonia, though. That’s pretty bad. You should probably see a lung specialist, but that means stopping chemo.” It’s hard to think clearly when you’re flabbergasted, but we determined that I didn’t have a cough or a fever, and that meant we could carry on with chemo as long as my condition didn’t get any worse.

And then it was time for me to transform back into Nancy Drew. As always, a little knowledge proved to be a dangerous thing. If you ask Mr. Google about interstitial pneumonia, he will tell you that it is relentlessly progressive, usually leading to respiratory failure and death.

But it turns out there’s a lot more to it than that. I won’t go into all the details, but there is a good chance it will resolve itself, and if it doesn’t, the condition should be treatable, assuming about a dozen ifs because, again, every case is different, every reaction different, every body different. So we just have to wait and see, and I must do my best to stay as healthy and sane as possible in the meantime.

Once again I am standing on the tightrope and as always I find strength in yoga and meditation to help me keep my balance. In fact, I’m taking an online intro to meditation course, not that I need it, but because it’s free and the teacher is Light Watkins, who is just so darned delicious. I could easily get lost in those pearly whites and that silky skin. My brain knows that he’s sitting in front of a camera somewhere on the other side of the world and could have filmed this stuff weeks or even months ago, but it feels like he’s looking right into my eyes, talking right into my heart. I also like his approach to meditation, which is that it’s normal to have thoughts while you’re meditating, but why you’re having those thoughts and what they mean doesn’t matter. Today, here was a mantra: I-don’t-know-and-I-don’t-care. 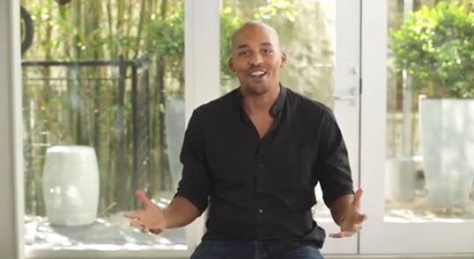 I have friends who are Sokkagakai Buddhists, which is a cultish branch of Nichiren Buddhism. Mostly I can get behind Buddhism. It’s not a religion as much as a system of thought, a philosophy based on the same principle of most religions, which boil down to some version of be nice to each other. Buddhism, though, avoids all the inexplicable miracles and threats of eternal damnation and guilt and shaming and all the other foolishness organized religions use to force people to behave in a prescribed way. Buddhism comes so much closer to my world view which has always been to do the right thing because you know it’s the right thing to do, not because someone else, human or divine, told you to. I have always had issues with faith; the only time it has ever worked for me was in high school algebra, when the formulas and theorems went too far beyond my ability to comprehend. I realized the only way to pass the course was to take them on faith, which I did. I passed the course and then lost my faith just as quickly as I forgot all those formulas and theorems.

Nichiren breaks the camel’s back for me because of chanting. It claims that the Lotus Chant is the key to universal understanding and everlasting happiness; if you chant the words enough times, all will be well. But you have to accept that principle on faith and I can’t cross that line. For me, understanding only comes from careful thought and study. Happiness is a choice, nothing more; you can choose to be happy with what you’ve got or make the effort to get what you need to be happy or you can whine and complain about how you can’t have what you want and call the universe a big, bad bully who is intent on making you miserable, you lazy, useless narcissist. Honestly, I don’t think the universe cares about you that much.

I-don’t-know-and-I-don’t-care works for me.  As I travel further and further into the bizarre world of Cancerland, I realize more and more how much I don’t know and I begin to care less and less. I am one tiny spark of humanity. My life will only be what I choose to make it and will only be worth the value I give it. Whether or not that’s enough is also my choice.