Sushi is highly esteemed by the Japanese and everyone from small children to the elderly see it as a great treat. Sushi bars vary from the ultra-snoot-ridden to the lowly conveyor belt type. The only thing cheaper than that is pre-made supermarket sushi, which is not bad but not highly recommended.

The snoot-ridden tend to be almost eerily quiet, the master chef glowering behind the counter and the rubber boot-licking apprentice suffering in silence as he does all the scut work. Perhaps there is a kimono clad waitress hovering in the background. There is no menu, no prices listed as all of that varies according to what is available at the daily fish market. When you have finished your meal, the master conjures a bill out of thin air and you pay it with grace and gratitude, trying not to gasp at the total.

Being the graceless and ungrateful foreigner that I am, that sort of place is not for me. This is more my style:

Cheap and easy, there’s no need to struggle with trying to read the menu. Just reach up and grab whatever takes your fancy as it rattles by in front of you, although you can order whatever you want from the waiting chefs, and this is recommended as some of the fish goes around until it begins to look a bit iffy. Some of these places have high tech sensors on the plates; a mechanical arm thwacks them into the bin if they’ve seen better days. But this restaurant was not that sophisticated. In addition to fish, there were also plates holding custard pudding and fruit juice, presumably for the kiddies. One mustn’t judge.

The particular chef who stood in front of us could give Oscar the Grouch a run for his money. He slapped the fish onto the plastic plates and shoved them into the faces of his customers.  When asked for more wasabi, he stuck his finger into the pot and unceremoniously smeared the wasabi onto the customer’s waiting plate, a slight sneer curling his grizzled lip.

He looked to be in his late 60’s so we theorized that he used to have his own restaurant but somehow lost it and is disgusted to be wasting his time in what he probably sees as a rat hole. The look of repulsion on his face as he opened a package of pre-sliced tuna was priceless.

One is expected to make one’s own tea thusly:

(If you’re interested in tea, a much more respectful and reverent series is being created at TMI with TIM.)

The dishes are priced according to the color of the plate…

…and you stack them up in front of you, sorted by color, so the staff can quickly calculate your bill and there are no surprises. The final tally: 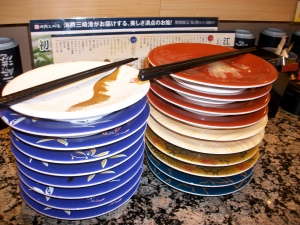 The gold ones are the most expensive so we tried to hide them at the bottom of the pile, but that didn’t fool anybody.

All in all, Sushi-Go-Round is a lot of fun. As one faces the snoot factor of daily life, it’s nice to know there are places that aren’t trying to pretend to be anything more than they actually are.